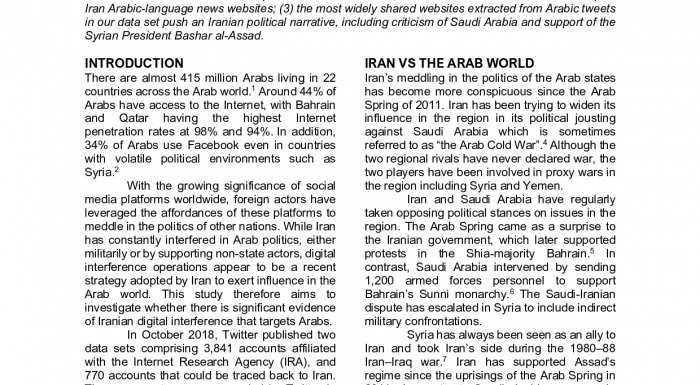 Iranian interference in the politics of Arab countries has become more self-evident since the Arab Spring of 2011. Iran has been trying to widen its influence in the region in a political confrontation with Saudi Arabia. In October 2018, Twitter released 770 accounts with potential Iranian origins. In this study, we examine Arabic-language tweets from these 770 accounts linked to Iran. We find that: (1) Arabic is the third most used language in the Iranian data set; (2) Arabic tweets were not aiming to socially engage with other Arab users but rather to promote certain websites, and more than 69% of the links are to pro-Iran Arabic-language news websites; (3) the most widely shared websites extracted from Arabic tweets in our data set push an Iranian political narrative, including criticism of Saudi Arabia and support of the Syrian President Bashar al-Assad.