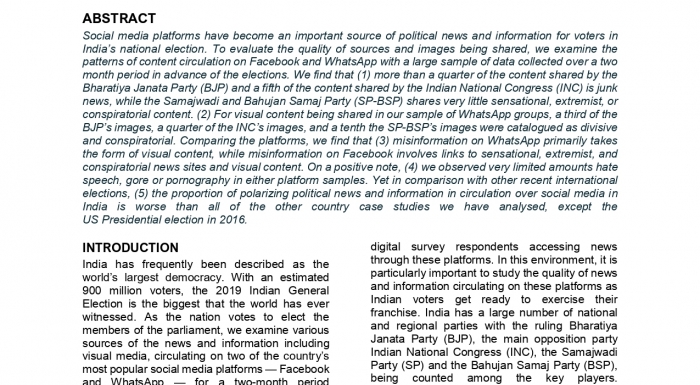 Social media platforms have become an important source of political news and information for voters in India’s national election. To evaluate the quality of sources and images being shared, we examine the patterns of content circulation on Facebook and WhatsApp with a large sample of data collected over a two month period in advance of the elections. We find that (1) more than a quarter of the content shared by the Bharatiya Janata Party (BJP) and a fifth of the content shared by the Indian National Congress (INC) is junk news, while the Samajwadi and Bahujan Samaj Party (SP-BSP) shares very little sensational, extremist, or conspiratorial content. (2) For visual content being shared in our sample of WhatsApp groups, a third of the BJP’s images, a quarter of the INC’s images, and a tenth the SP-BSP’s images were catalogued as divisive and conspiratorial. Comparing the platforms, we find that (3) misinformation on WhatsApp primarily takes the form of visual content, while misinformation on Facebook involves links to sensational, extremist, and conspiratorial news sites and visual content. On a positive note, (4) we observed very limited amounts of hate speech, gore or pornography in either platform samples. Yet in comparison with other recent international elections, (5) the proportion of polarizing political news and information in circulation over social media in India is worse than all of the other country case studies we have analysed, except the US Presidential election in 2016.

In addition to the data memo, our researchers have also written a brief background on “cyber troop” activity in India. “Cyber troops” are defined as government or political party actors tasked with manipulating public opinion online (Bradshaw & Howard, 2017, 2018). This country profile provides an overview of the various tools and techniques used to amplify the spread of “junk news” on social media and suppress the voice and participation of political opponents or vulnerable populations online. Drawing on data from the Global Cyber Troops Annual Inventory, we provide information about the capacity and resources that have been invested into social media manipulation in the lead-up to the 2019 general election.