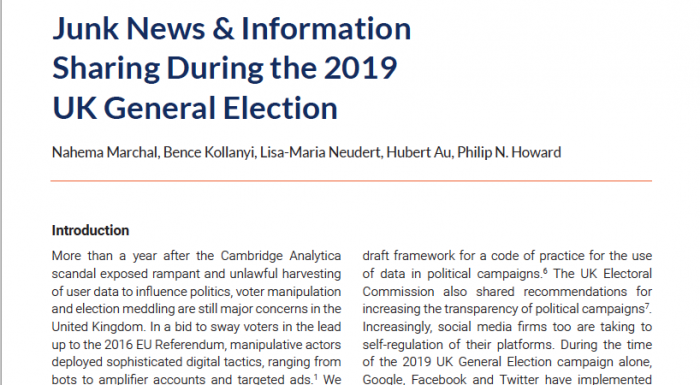 Today, an estimated 75% of the British public access information about politics and public life online, and 40% do so via social media. With this context in mind, we investigate information sharing patterns over social media in the lead-up to the 2019 UK General Elections, and ask: (1) What type of political news and information were social media users sharing on Twitter ahead of the vote? (2) How much of it is extremist, sensationalist, or conspiratorial junk news? (3) How much public engagement did these sites get on Facebook in the weeks leading up to the vote? And (4) What are the most common narratives and themes relayed by junk news outlets?

To answer these research questions, we collected 1.76 million tweets related to the UK General Elections using the Twitter Streaming API between 13th and 19th November. These were collected from 284,265 unique users using a list of 40 election-related hashtags associated with the primary political parties in the UK, the 2016 EU referendum, and the 2019 General Election itself. From this sample, we extracted 308,493 tweets containing a URL link, which pointed to a total of 28,532 unique URLs.

Sources that were shared ten times or more across our collection period were manually classified by a team of three coders based on a rigorous grounded typology developed and refined through the project’s previous studies of nine elections in several countries around the world.10,11 After two rounds of test coding, our team reached a Krippendorff’s alpha of 0.77, indicating high inter-coder reliability. Using this technique, we were able to successfully label nearly 96.4% of all links shared in our sample (see online supplement for full specification of methods).

To better understand the nature of the Twitter conversation about UK politics during the campaign, we analysed the relative use of party and issue-based hashtags, as well as levels of high-frequency tweeting and patterns of information sharing for our sample week. We then measured and compared public engagement with producers of junk and professional news over Facebook in the first three weeks of the campaign (6th–27th November) using the CrowdTangle social monitoring tool.11 Lastly, we conducted a thematic analysis of the junk news stories receiving the most engagement on UK Facebook during our data collection period, to shed light on the political narratives favoured by junk news outlets.

Our main findings are: