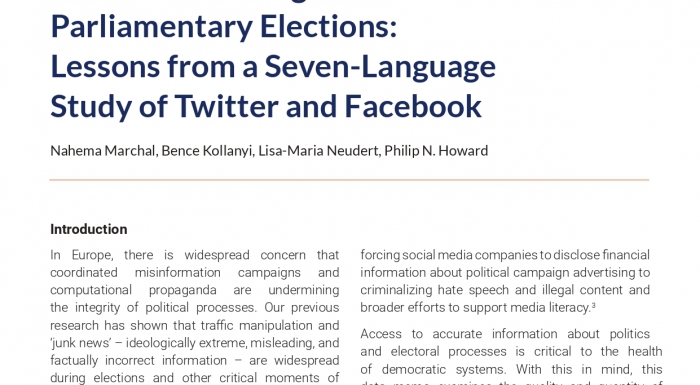 Access to accurate information about politics and electoral processes is critical to the health of democratic systems. With this in mind, this data memo examines the quality and quantity of political news and information that social media users were sharing across seven European languages (English, French, German, Italian, Polish, Spanish, and Swedish) in the lead-up to the 2019 European parliamentary elections.

We collected 584,062 tweets related to the European parliamentary elections from 187,743 unique users between 5 April and 20 April using election-related hashtags. From this sample, we extracted 137,658 tweets containing a URL link, which pointed to a total of 5,774 unique media sources. Sources that were shared five times or more across our collection period were manually classified by a team of nine multi-lingual coders based on a rigorous grounded typology developed and refined through the project’s previous studies of eight elections.

To provide a snapshot of public engagement with sources of misinformation shared ahead of the European elections, we extracted the five most popular sources of junk news in each language sphere and measured the volume of Facebook interactions with these outlets in the month preceding the election (5 April–5 May) using the NewsWhip Analytics dashboard. As points of comparison, we computed the same metrics for the five most popular professional news sources from each language sphere. Finally, to gain a better understanding of the different political narratives favoured by junk news outlets, we conducted a thematic analysis of the 20 most engaging junk news stories on Facebook during our data collection period.

Our main findings are:

To track what kinds of junk news are circulating in the EU, have a look at our junk news aggregator.

The full list of Tweet IDs for Tweets analysed in this study is available on our replication data page.

The representative deficit in different European Party Systems: An analysis of the elections to the European Parliament 2009-2014