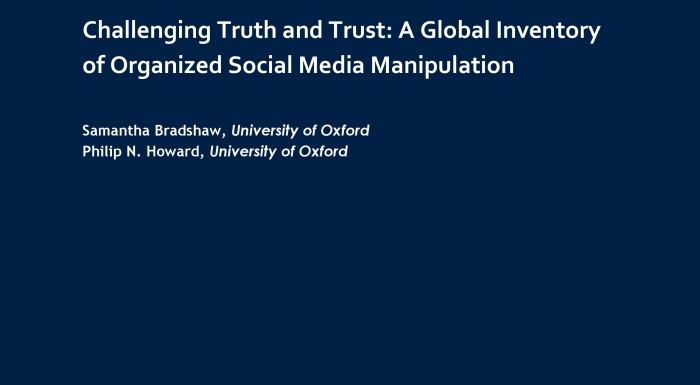 The manipulation of public opinion over social media platforms has emerged as a critical threat to public life. Around the world, a range of government agencies and political parties are exploiting social media platforms to spread junk news and disinformation, exercise censorship and control, and undermine trust in the media, public institutions, and science. At a time when news consumption is increasingly digital, artificial intelligence, big data analytics, and “black-box” algorithms are being leveraged to challenge truth and trust: the cornerstones of our democratic society.

In 2017, the first Global Cyber Troops inventory shed light on the global organization of social media manipulation by government and political party actors. This 2018 report analyses the new trends of organized media manipulation, and the growing capacities, strategies and resources that support this phenomenon. Our key findings are:

Social media manipulation is big business. Since 2010, political parties and governments have spent more than half a billion dollars on the research, development, and implementation of psychological operations and public opinion manipulation over social media.  In a few countries this includes efforts to counter extremism, but in most countries this involves the spread junk news and misinformation during elections, military crises, and complex humanitarian disasters.

Download the methodology appendix, which contains summaries for each of the 48 countries mentioned in the report.

Download the open Zotero library with the news articles and references used in this report.